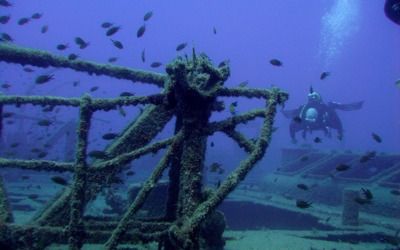 Have fun exploring the wrecks here!

Unfortunately, in the last few years a couple of the smaller wrecks have been lost. At the end of 2006 major new building work started at Las Palmas, extending the port, and some of the smaller wrecks have been buried under tons of earthworks and infill. Other wrecks are not yet covered, but at one stage in 2007 the visibility was so poor that diving these wrecks was not practicable. In 2014 the extension of the harbour means we can no longer dive on the Kalais.

Fortunately the new harbour wall is largely finished now, and diving on the Frigorifica and other wrecks has restarted. The Arona is unaffected by these changes as are the Mogan wrecks, but a storm in the south of the island has also broken up the Hydrofoil! The boat dive to the Catedral is also unaffected. Please contact us if you are interested in these wrecks and we can give you the latest updates. 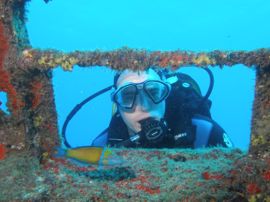 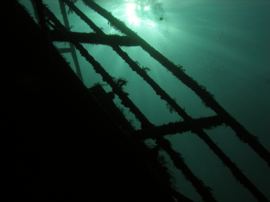 Lying just outside Las Palmas, this is the wreck of a hundred-meter long cargo vessel, which was scuttled in the 1980's after the owners refused to pay mooring fees. It sits upright on the sea bed just outside the new harbour works and is in an excellent state of preservation, and still boasts many artefacts and equipment that would long ago have disappeared in British waters.

We can no longer dive here, which is a pity as it is now the home to very big schools of barracudas and Damselfish swimming around the king post which can be followed from 14 meters to the deck at 27 meters. Here you can enter the hold, which still contains much of its cargo of cement bags. At the stern the walkways provide a lovely swim-through and you can find both the bath and the cooker. Sea-life includes glasseyes, lobsters, morays, wrasse, damselfish, parrotfish, bream and other common species, and Angel-Sharks have been seen prowling nearby on the sand. 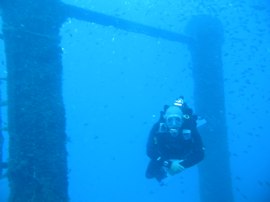 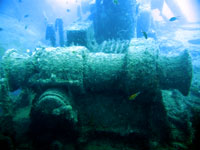 Another wreck just outside Las Palmas, this is a Russian refrigeration vessel, the Korsakov which has sunk onto it's side in 35m of water, and is now home to a huge shoal of barracudas. You can enter many of the holds (but they still retain the cold of their past use) and parts of the superstructure which remain intact and to the side of the vessel.

This vessel is about 20 minutes to the south of Las Palmas and is not effected by the harbour works. In good conditions it is an awesome sight, largely intact and surrounded by shoaling fish. It is a large Cargo vessel lying on it's side in 40m of water, allowing a variety of dives at depths from about 25m to 35m along it's length. There are large shoals of barracudas, sardines, damselfish and bastard grunts; and you are likely to see amberjack, angelsharks or rays patrolling the perimiters. There are even some small red gorgonias starting to grow on the superstructure as well as big giant anemones in the more shaded corners. 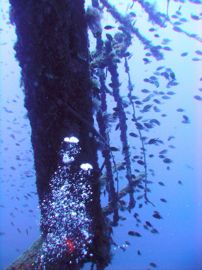 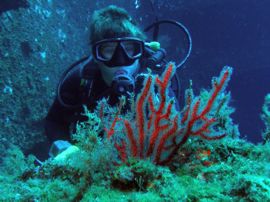 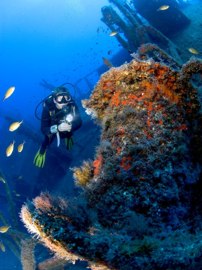 This vessel turned completely upside down when it capsized in 24m of water, but then sank onto two reefs which lift the bows and mid-section nicely clear of the bottom. This allows the diver to safely swim right under the wreck, and right under the stern, providing an unusual and confusing vista for any diver. This may have now been covered by builders rubble!

This was a 20 meter maximum where you got three wrecks in one dive. To see these boats now you will need a JCB! 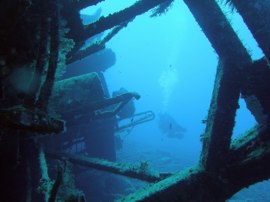 Just outside the harbour at Mogan are two small wrecks sunk to provide interest for the 'Yellow Submarine' adventure which runs there every day. Their shallow depth and compact nature makes them an ideal site for a first wreck dive, and experienced divers can cover both wrecks in one dive. Listen out while under water, and if you hear a loud whirring then watch out for the submarine as it makes it's hourly circuit around the two wrecks.

This is the wreck of a 30m long Russian hydrofoil ferry which sank during 2003, largely intact. Originally It sat upright on the bottom in 18m and was solid and intact making it an ideal first wreck dive. You could easily enter the main cabin and exit through some of the plexiglass windows, explore the pilots cockpit with it's russian radio and controls, or relax in one of the airline seats in the rear cabin. Unfortunately during late 2006 the wreck was blown apart during a storm and is now a shadow of of its former glory. 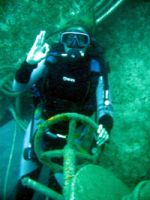 Please note that a minimum number of divers will be required for wreck diving in Las Palmas and that because of this we do not undertake wreck dives every week. As the situation here changes every few months we recommend that you contact us using our contact page for the latest information.

At the end of the day we always get you home safely - our drivers will look after you and ensure you get back to your hotel.

15 Specials
not to miss
in El Cabrón

Get your
PADI Open Water
in Gran Canaria
Recent Updates

Photo of the week

on:12/Mar How to tell the Black-bar soldierfish from the normal Glass-eye... get them to pose next to each other! The Soldierfish has now been in the cave for almost two years!