Four great things to do in Gran Canaria 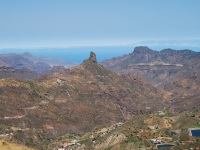 Gran Canaria is a beautiful Island - It offers so much that it has been named the 'Continent in Minature' - because it has a little bit of all the continents. You can walk through the desert of the Maspalomas Dunes in the morning, the bustling city of Las Palmas at lunchtime, and admire the spectacular mountain scenery with it's pine forests in the afternoon.

There are already several really good guides to Gran Canaria, so rather than try and cover everything, what we have picked is four of our favourite things to do in Gran Canaria - for the days when we are not Scuba Diving of course!. We have tried to pick some of the highlights which are not on the 'normal' tourist routes, where you can really feel the Spanish culture, or appreciate the real History of Gran Canaria.

Just up the road from Arinaga, our local administrative centre is Agüimes. This has been described as the best preserved traditional hill town in the Canaries, and the local council takes care to ensure that the traditional character is maintained. As you walk around the town be prepared for the artwork, the sculptures, and the little touches which help to preserve the character of the town.

The local square is used for many events, starting with the traditional '3 Kings' tableau on the 6th January, which includes the kings, camels, Roman Soldiers and much more as the procession snakes its way around the town. In Spring, don't miss the 'Murga' competition in which groups of 30 to 50 people dress up in some of the most bizarre costumes, and in late summer, the Fiesta takes over the centre of the town, and you will see the traditional decorated rugs spread beneath the upper windows of many of the houses.

If you want to snack in Aguimes then the cake shop on the square is excellent during the day, while at night the Hotel 'Villa de Agüimes' and Restaurant Villa Rosa are both close to the square. 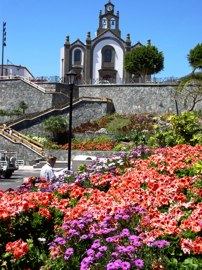 Keep driving from Agüimes into the centre of the island of Gran Canaria, and the only main road will take you to Santa Lucia. This is a really sleepy little town, and like Agüimes, was once the administrative centre for the area. It has a small farmers market where you can buy local produce including oranges, olives, and other fruit and vegetables in season, and some nice cafe's and restaurants, some with great views over the valley.

One little treasure not to miss is the local Museum. This is housed in a strangely crennalated house about 200 downhill from the farmers market. The entrance fee is just 2 euros, and is an absolute bargain. The original owner, now deceased, was an avid collector of anything connected with Canarian History. So you will find lots of artifacts from early inhabitants including some of the Mummies recovered from the excavations at nearby Ansite (Yes, the ancient inhabitants, who were 'civilised' by the conquistador, used to mummify their dead!) 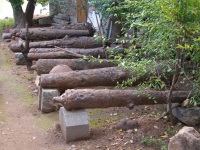 One of the mysteries for me here are the canons. Outside the museum is a line of iron canons, clearly recovered from the sea bed, and just as clearly, not being preserved properly to avoid decay. I asked the lady where they can from and she said 'El Burrero', which is a small seaside town about ten minutes drive up the coast from Arinaga. I think they were 'salvaged' in the 1940's or 50's before the days of underwater archeology, so they could have come from the Gando Shoal (which has claimed many wrecks) or from some now forgotten wreck site? 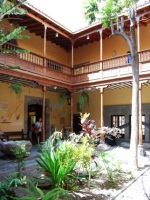 There is plenty to see and do in Las Palmas, the capital of Gran Canaria. It is the largest city in the Canaries, and also Europe's most Southerly City. If you are interested in the history of the Island, head down to the old town, centered around the cathedral, and make sure that you visit the House of Christopher Columbus (Casa Colon). The house contains details of his voyages of discovery, as it was from Gran Canaria that he set sail on each of his voyages. A reconstruction of his cabin shows just how small the ships were with which he discovered the 'new world'. 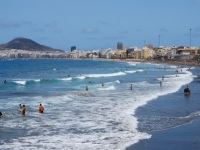 If you want to chill out, take a walk along the Playa de las Canteras beach. This is the longest beach alongside a major city, and hosts many events from the half and full marathon in winter, to surfing and cultural events. The new town also holds the shopping district, where you can visit the major department store 'El Corte Ingles' or even one of the few remaining C&A shops. 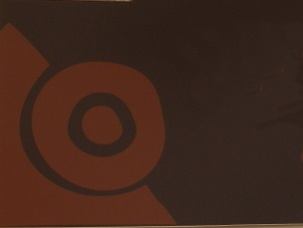 If you carry on from Las Palmas along the North Coast of the Island, you come to the unforgettable town of Galdar, perched on the lower slopes of a defunct volcano. The Cuevas Pintadas are a set of caves from the time before the Spanish conquest, and come as a great surprise, as they are right in the centre of the town, only a hundred meters from the central square and church. Every day at 12.30 they carry out their tour with an English commentary - and it is not to be missed. At 6 euros per person it is an amazing entertainment at a bargain price. It is better to book your tour in advance either from the official museum website or by calling 902 405 504. You can also buy tickets at the door, but each tour has a size limit.

Gran Canaria - a continent in miniature

The longer we stay here, the more apt the saying becomes. From the pine forests in the North to the Saharan dunes in the South, Gran Canaria spans a wide range of micro climates and cultures. We have just selected a few of our favourite places, but there are many other special places and events to choose from. Fell free to ask about them, so that you can really enjoy yourself while you are here in Gran Canaria.

If you want to be a bit more active, then you can choose from a wide range of adventure activities and excursions in Gran Canaria including windsurfing, cycling, walking, running and of course scuba diving.

Still got questions about diving in the Canaries? Please do not hesitate to contact us and we will be happy to help!.


Some other relevant pages in our site