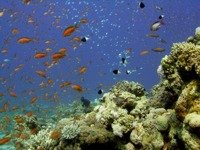 With huge uncertainty and threat surrounding the Middle East over the last few years, and the dangers of air travel through the worst war-torn sectors, many people ask us how diving in the Canary Islands compares with diving in popular Middle East dive destinations such as the Red Sea, Turkey, Isreal, Sudan, Jordan, and the Persian Gulf.

The Canaries are an excellent place to dive ... not as vivid in colour as tropical destinations, but more prolific that the Mediterranean, with sharks, rays, turtles and wrecks and plenty of brightly coloured fish, and we will also explain, sea conditions, weather, family and health factors.

Diving in the Canary Islands

The first surprise is that the Canaries and Red Sea Resorts are both as far South!. Two popular diving destinations, Sharm-el-Sheik in Egypt and Arinaga in Gran Canaria both sit at Latitude 27.85º.

Yet because of the geography surrounding both, the Canaries have a slightly cooler sub-tropical climate, while the Red-Sea has a warmer Tropical climate. In summer the difference in water temperature is significant with temperatures over 30ºC in the water in some Middle East dive sites, while the Canaries reach a peak of about 24ºC; however in winter the difference is much less, with the Red Sea cooling to low 20's while the Canaries, warmed by the Gulf stream in the Atlantic, only drop to around 18ºC.

Secondly, many people think that as the Canaries are 'in the Atlantic' that they suffer from the same sort of stormy weather, icebergs and cold water that could be used as a backdrop for a remake of 'Titanic'.

The reality is that weather conditions are very stable in the Canaries, with high pressure from the 'Azores High' for much of the year and steady trade winds in summer. Just like the Red Sea, the Canaries can have odd stormy days, but if you look at our history of diving conditions in Arinaga you will see that we dive nearly every day of the year.

The Canaries have always been renown for their sunshine, and even in winter there will be the chance to top up the tan on the non-diving days. Surface temperatures in Egypt can sizzle at over 45ºC in summer, while in the Canaries a temperature of around 35ºC is more common, with the trade winds cooling the air. Las Palmas, the capital of Gran Canaria is rated as having one of the world's best 'City' climates - not too hot in summer yet comfortably warm in winter.

This difference is enough to restrict coral growth in the Canaries yet the diving conditions can be very similar, with good water clarity for most of the year in both areas. The Canary Islands have a range of colourful fish including Parrotfish, wrasse, damselfish, glass-eyes and more, and if the Canary Islands lack the variety of the Middle East, there are many species common to both areas, including lizardfish, goatfish, pufferfish, barracudas and moray eels which can be found in abundance here in the Canaries.

More of interest to divers, is that the volcanic seabed has many dramatic rock formations that can be a major attraction to diving in the Canaries. The volcanic rock has been eroded in many of our dive sites to create caves, swim-throughs and spectacular underwater arches. And if you like the dark it is easier to organise a night dive in the Canaries, as they are not hindered by 'Security Restrictions'.

If you are bringing your camera to take underwater photos then there are plenty of colourful subjects, such as cleaner shrimps, tiger morays, glasseyes, parrotfish, damselfish and wrasse. Watch the video below of just one dive in Gran Canaria and you will get a good idea of the variety and colours of the marine life here.

The Canaries are also a great place to see bigger species, such as angel sharks and rays. There are five common species of rays (common, round, marbled electric, eagle and butterfly ray) and occasional visits from rough-tailed, and bull rays, manta rays (in autumn) and skate. Finally, if you are into wreck diving rather than reef, then Las Palmas in Gran Canaria has one of the best collections of diveable wrecks in the Atlantic. "The wrecks here are bigger and better than most Red Sea wrecks" is what one photo-journalist said when he did his first dive on the Arona outside Las Palmas.

So where are the best places to dive in the Canaries?

What a fantastic outfit! All the staff were welcoming and helpful from the outset. Booked the advanced open water course having completed open water in UK. Day one was spent getting back into things, a couple of fun dives (no doubt testing that we weren't clowns!). Thanks Hector and Edwardo. ..... Thanks again for a fab week, we'll recommend to the world and look you up if we're in Gran Canaria again. Give us a shout if you're ever visiting West Wales, we'll throw you off some cliffs Coasteering :D Cleopatra & Jerry x
26-02-2018  Cleopatra_CB Published by Tripadviser.com See full review

When it comes to Scuba diver training, there is little to choose in terms of facilities and structure between the Canary Islands and the Middle East. Both have long established, professional training Schools, which are regulated by their governments to achieve high standards of safe training. There are schools which cover PADI, BSAC, CMAS, ACUC and several other training brands throughout the Canaries. Particularly for those looking to fit in a course quickly, the ability to vary flight days can mean that you do not need to spend a full week away to get a qualification that is done in two or three days. Diving hot-spots such as the El Cabrón Marine Reserve make an excellent place to take courses such as the PADI Open Water Course because you get to see lots of interesting marine life such as cuttlefish, arrowhead crabs, octopus, trumpetfish, parrotfish, damselfish, wrasse and much more on all the training dives. We run courses all year round in the El Cabrón Marine Reserve so there are no restrictions on when you can do your course.

Don't Miss
15 Specials
not to miss
in El Cabrón

With current safety concerns, regional volatility and terrorism threats across the Middle East, if you have a family with you they will feel safer and secure in the Canary Islands. The Canaries have a much better developed infrastructure for tourists, and are a modern, western country with a stable economy, good communications and government, and they have created an open and accessible tourist economy with a wide range of family and adventure options.

There is a huge range of accommodation in the Canaries from simple apartments to five star luxury. Packages are easy to organise and there are plenty of flights from all over Europe. In contrast, many families feel constrained by the security, religious and cultural differences in the Middle East. For families in particular, with a mix of diving and non-diving members, the Spanish Canary Islands offers options such as theme parks, carnivals, concerts, unrestricted travel, car hire and diversity which are more and more difficult to find in some parts of the Middle East. 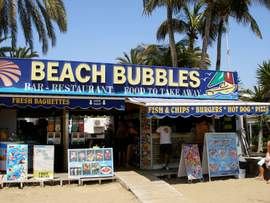 Familiar drinks and food
For some families, food and drink are a key factor, and our personal experience is that food standards are much higher in Spain. Those who are predisposed to stomach upsets may be put off some areas of the Middle East by stories of 'the Pharoahs revenge'. If you enjoy an alcoholic drink then remember that alcohol is only available to tourists in their hotels in some countries such as Egypt and banned completely in others.

If you want a good dive destination without a seven hour flight then you should come and try diving in the Canaries. The Canaries have much more variety of diving than the Mediterranean, as well as warmer seas and are open all year round. If you are worried by the political uncertainties or heavy security in the Middle East, or looking for a short 'winter sun' break with a couple of days diving, or perhaps a family holiday where diving is just part of the mix, then the Canary Islands have many advantages.

When you take into account the ease and frequency of flights to the Canaries; low-cost flights from Ryanair and others; Euro pricing and currency and good technology support and infrastructure; then the Canaries can make a great place for a 'long diving weekend' or mixed activity trip.

Still got questions about diving in the Canaries? Please do not hesitate to contact us and we will be happy to help!.

15 Specials
not to miss
in the Canaries!

PADI 5-star
diving in
the Canaries

Dive options
in the Canaries

Get your
PADI Open Water
in the Canaries
Recent Updates

on:2022/09/24
We normally only see the Grey Triggerfish (Balistes capriscus) in summer (May-July) when they come into shallow water to breed. This week we have seen one a couple of times. We assume that the rest of the year they live in colder, deeper waters.